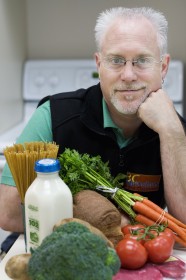 Gerry Kasten loves food! He is a cis-gender, queer ally, born to a farming family. He still helps his brother bring in the harvest each year.  He has an Honours Diploma in Commercial Cooking and has both a Bachelors and Masters degree in Nutrition. His Master’s research was on food choices amongst gay men. He has worked in Public Health in BC for the past twenty-two years, has led the boards of directors of both Dietitians of Canada and the BC Agriculture in the Classroom Foundation, and served as the seventh Empress of Edmonton, Alberta. Gerry is also a Sessional Instructor in UBC’s Dietetics program.  Gerry’s chequered past has led him to a critical analysis of the constructions of gender, particularly as they are enacted through food.

He wants to live in a world where people celebrate food, sharing it with those they love, taking its pleasure without restraint because its flavour saturates their most sensuous appetites.

Trans and gender diverse folks are welcome to drop by our Sunday clinics to chat with Gerry about nutrition, staring March 10!